Proving the “Super” in Supercomputers: How High Performance Computing is Fighting COVID-19 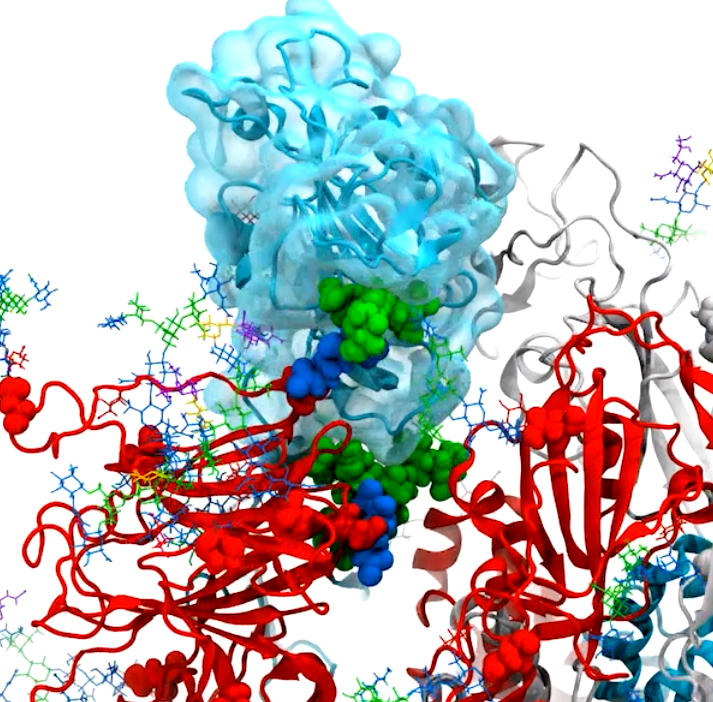 (Pictured above: A screenshot from the molecular simulation of the Sars-CoV-2 spike protein / Credit: Lorenzo Casalino, Amaro Lab, UCSD)

There’s a lot of information out there about COVID-19.  It’s swirling around us in the news and on social media like a massive glitter bomb exploding in an F1000 tornado (only not as sparkly).  It’s everywhere and sticks to everything, and it can be hard to know what to trust.

Thankfully, today’s technology has offered more options for scientific discovery than ever before, paving the path of information worth following. From the way the virus looks to how it movies to how it spreads and everything in-between, high performance computing is playing a key role in understanding how to win this fight.

Why Coronavirus Is So Contagious

Using more than 14-thousand cores per run on the Top-10 ranked TACC supercomputer Frontera, Dr. Rommie Amaro and her team at the University of California San Diego have found a way to computationally simulate what the COVID-19 virus spike protein looks like, as well as how it moves -- something that can’t be seen through lab experimentation, and is only possible today through high performance computing.

What they’ve found is fascinating.

Turns out, this virus is an especially clever one.  From the moment it enters the body, it disguises itself with a sugary shield that makes it appear similar to any typical human cell, making it difficult for an immune system to detect.

In other words, while our immune system is on patrol duty, it just walks right on by the citizen-disguised virus, oblivious to the intruder about to make the human host potentially very sick.

By openly sharing the results of their breakthrough atom molecular dynamics simulations with the global scientific community, Rommie’s team is contributing to scientists’ understanding of COVID-19 and how to stop it.

“We are learning things that, really, you cannot see in other ways.  There really is no alternate experiment that could be performed that would give you what we can provide with these simulations.  It is really unique.” - Dr. Rommie Amaro

Recently at the virtual supercomputing conference, SC20, Rommie and her team were awarded a Gordon Bell Prize -- known as the Nobel Prize for supercomputing -- for this very work around the coronavirus.

“We showed for the first time what [the virus] looks like.  People hadn’t seen that before, and they couldn’t without compute.  So simulations, in that sense, have a very unique role to play in this sort of space of research in many different areas, but especially in the case of COVID-19.” - Dr. Rommie Amaro

We go into detail with Rommie about her discoveries on the Big Compute Podcast episode, The Clever Coatings of Coronavirus (and throw in some marshmallow peeps along the way, because SUGAR):

We’ve all been told to socially distance, especially when occupying an indoor space.  But is the standard six feet really enough?

Turns out -- that depends.

Jiarong Hong of the University of Minnesota used supercomputers to simulate how aerosol particles travel in different enclosed locations, and he found that ventilation placement is a critical determining factor.

For instance, through a computational fluid dynamics simulation of an infected teacher speaking at the front of a classroom, Jiarong found that if the air-out vent was behind the teacher’s head, aerosol particles tended to stay near the teacher, and social distancing seemed to offer a decent degree of protection.  But when that air vent was placed on the opposite side of the room, far from the teacher, aerosol particles from the teacher’s mouth were pulled toward the vent, crossing the entire room and potentially hitting every person along the way in the process.  In that case, even 16 feet didn’t seem to be enough social distance.

Jiarong and his team also ran aerosol particle simulations in elevator and grocery store scenarios, where they began to suspect that plexiglass barricades might be as effective at protecting a person as a salad bar sneeze guard is at protecting a pile of lettuce from the air (spoiler: not very).

“Think about it. The disease is airborne, right? So, ‘airborne’ means that the particles are floating there -- they have been transported. In fact, the flow can go past the plexiglass because this air can disperse in all directions, right? So, as long as there is a gap, air can come in there and still disperse the particles.” - Jiarong Hong

And in some cases, it might even be making a person more susceptible to infection because aerosol particles can be trapped in a circulating pattern along a plane of plexiglass.  Jiarong is currently studying the effectiveness of plexiglass through additional computational simulations, with more results expected soon.

We go into detail with Jiarong about his simulation results on how aerosol particles travel through a classroom, elevator, and grocery store, in the first half of the podcast episode, How COVID-19 Spreads Indoors:

When the pandemic first began, a choir in Washington state hit the news in a big way when more than three-quarters of its members tested positive for coronavirus after attending two rehearsals.  This event only solidified the suspicion that COVID-19 easily spread through singing by way of generated aerosol particles being projected into the air.

But what about wind and brass instruments -- the ones that involve a person blowing air into a mouthpiece and using the force of the breath to help produce the sound?  The Minnesota Orchestra had this very question, so they approached Jiarong Hong’s team at the University of Minnesota to find the answer.

So, Jiarong and his team conducted a quantifiable risk assessment on how each of these instruments generated aerosol particles, and then compared those results to aerosol particle generation in talking or breathing.  Specifically, they looked at the:

While some instruments passed the simulation test with a “medium” risk score, meaning they generated a similar amount of aerosol particles as talking or breathing, there was one high risk instrument that stood out for generating ten times more aerosol particles.

There’s apparently a good reason trumpet players look like they’re on the verge of passing out after a solid trumpet solo -- they’re generating more aerosol particles than any of their musician friends.

Conversely, the tuba came in at the opposite end of the spectrum with a low risk score, after showing it generated less aerosol particles than talking or breathing.

“You put a lot of gas [into the tuba], but the tubing is so long, so much longer than trumpet, so you get a lot of condensation inside the tube and a lot of the aerosol particles deposit in the inner surface of the tube.” - Jiarong Hong

Which made me think that perhaps every city council in the United States should be setting up outdoor socially-distanced holiday tuba concerts this season.

We go into detail with Jiarong about how each of these instruments ranks on the risk scale in the second half of the podcast episode, How COVID-19 Spreads Indoors:

Could Plants Hold the Key to Conquering Coronavirus?

In 1962, a man by the name of Arthur Barclay directed his team of botanists to collect samples from a random tree in a Washington state park.  Thirty years later, those samples were developed into a semisynthetic chemotherapy drug called Taxol that has both lengthened and even saved the lives of millions of cancer patients.

So is there a plant out there that holds the key to treating COVID-19?

Scientists agree that there must be a number of medically beneficial chemicals that lay undiscovered within plants around the world.  And for decades, the only way to find the benefits of these chemicals was through one-by-one physical experimentation in the lab -- something that takes a great deal of time and money.

But today, supercomputing dramatically speeds up the process.

Dr. Jerome Baudry of the University of Alabama in Huntsville teamed up with HPE Cray to run computational simulations of hundreds of thousands of chemical compounds that have been collected from natural substances like plants across the globe for years, in hopes of finding any that could potentially be used in a drug treatment against the coronavirus.

“Our simulations are based on models to calculate how much a given pharmaceutical will be happy or not to stick to a given protein from the virus. So, we reproduce the test tube screening that would take a long time and a lot of money, and calculate the interaction between the atoms that are coming from the protein of the virus and the atoms that are making the substances we're interested in. So, it's very much based on physics and physical chemistry.” - Dr. Jerome Baudry

Using the 4,000-core HPE Cray supercomputer called Sentinel with the computational power of 200 teraflops, Jerome is able to run a million compounds in a single day -- something that would have taken 500 years to do with technology from just 25 years ago.

In fact, the Top-10 supercomputer, Summit, housed at the Oak Ridge National Laboratory where Jerome used to work, has the capability to run computational simulations on a billion chemical compound profiles in a single day.

So if there’s a natural chemical compound that has been collected and identified, chances are good that Jerome has run it through a supercomputer.

“Instead of manufacturing synthesizing molecules totally out of the blue, let's take advantage of this millions of years of evolution that has done a great deal of chemical work for us, and try to see if nature has already provided us a key for the door we are trying to open. Now, we still have to try all those keys, but we may not have to invent it from scratch basically.”  - Dr. Jerome Baudry

Through simulation, Jerome was able to narrow the 200-thousand chemical compounds down to 125 that show potential against COVID-19.  With that knowledge, those 125 chemical compounds have moved into the physical experimentation phase in a Nashville lab, where the number will likely be narrowed down even further to 5 or 10.  But instead of taking 30+ years like it did with Taxol, this time around it’ll be just a few short months.

We spoke to Jerome about his research, and how supercomputing is not just advancing scientific discovery at an incredible pace, but how it’s changing the very way we approach this kind of scientific research:

These studies are just the beginning.

Vaccine candidates for COVID-19 have already been announced in record timelines, and modern technology is what makes that possible.  Programs like Tech Against COVID and the COVID-19 HPC Consortium even offer compute resources to scientists and researchers fighting the virus, dedicating millions of core hours to the cause.

Yeah, there are still a number of questions that are yet unanswered, but if you look at the remarkable pace at which scientific discovery is moving, we are breaking records and deepening our understanding faster than ever before, and it’s only a matter of time before we potentially know more about this virus than we do about any other virus over human history.

And I consider that pretty super.

Jolie Hales is an award-winning filmmaker and host of the Big Compute Podcast. She spent two years as an on-camera spokesperson and Disney Ambassador for the Walt Disney Company, and has performed as an actor, singer, and emcee in various shows and programs. She currently works as Head of Communications at Rescale.