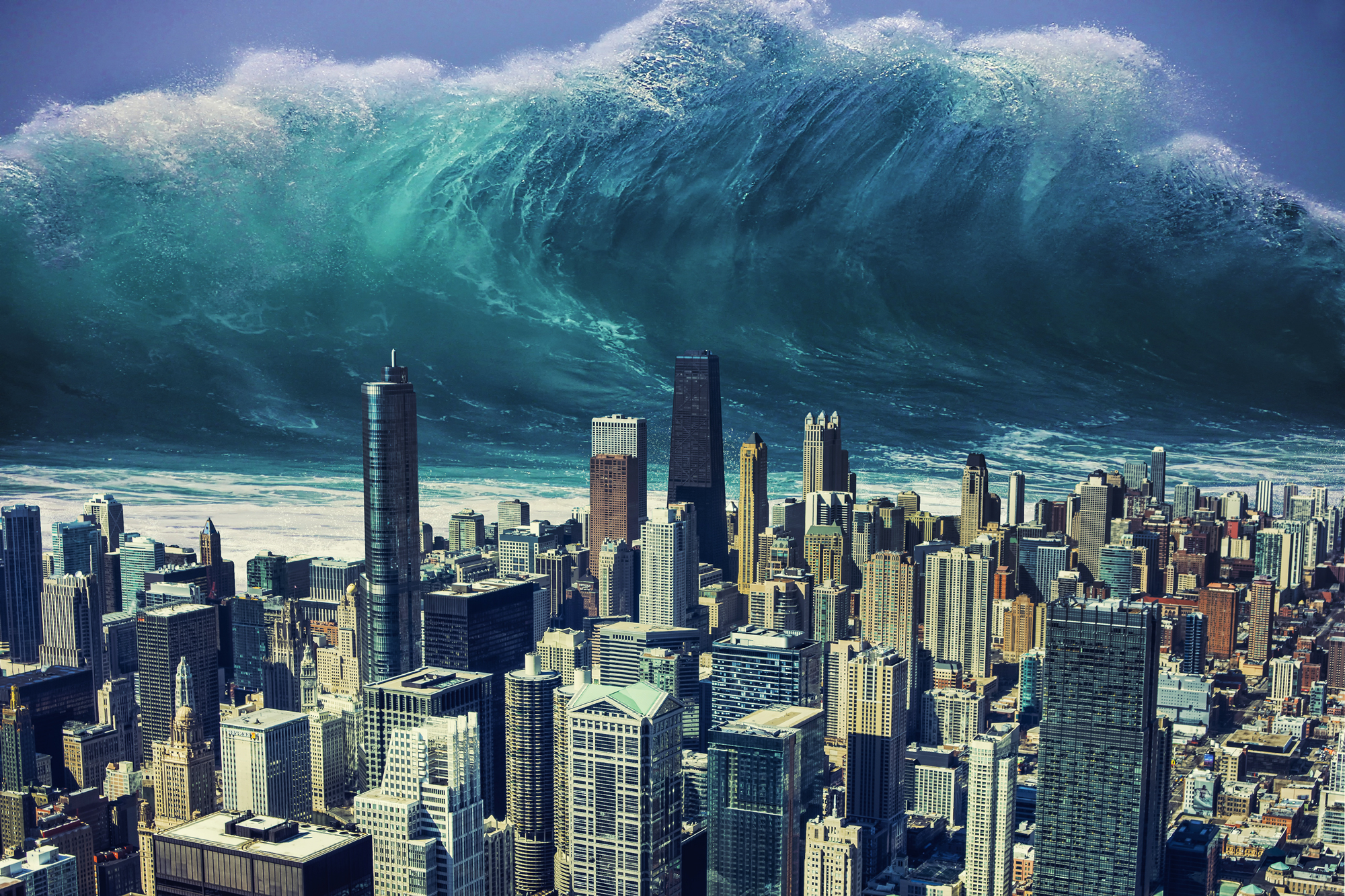 When I was a kid (ok… and maybe an adult, too), I thought tsunamis looked like this:

...giant walls of water casting menacing shadows over skyscrapers until everything came crashing down.

Though apparently I’m not alone.

Many people in society today believe as I did when I was a *cough* “kid.”  Maybe we can blame Hollywood for that.  I mean, I once pulled a 300-pound man out of a wrecked car assuming it would explode, because that’s what happens on TV, right?  (True story -- the cops were rather confused when they found a moaning man on the ground, and I was sore for days.)

As you likely know, tsunamis depicted in Hollywood are about as scientifically accurate as tornado-hitchhiking sharks swirling around your head.

So in the spirit of science, the good people at the National Oceanic and Atmospheric Administration (NOAA) attempted to correct popular misconception by simulating a much more accurate visual depiction of what a tsunami could realistically look like:

Indeed, thanks to computational simulations on supercomputers, we know more about these waves than ever before, as well as what that means for those living along -- or even visiting -- the coastlines.

The “Wall” of Water

Right.  Or a thousand-foot wall of water, but go on.

“Tsunamis actually are technically really long waves.  A better way for someone to imagine it would be to think of, for example, how the tide slowly comes in.  You can’t really tell that it’s a wave, but it technically is.  So a tsunami is really similar in that you basically just have a rush of water coming inland, and it just keeps going and going and going, like a tide coming in that doesn’t stop.” - Dr. Lauren Schambach

Ernest De Leon and I had a chance to speak to Dr. Lauren Schambach, a recent Ph.D graduate of Ocean Engineering at the University of Rhode Island, on a recent episode of the Big Compute Podcast, Tsimulating Tsunamis.  She told us about an interesting scenario that occurred over a hundred years ago, where computational simulation has brought us closer to the forensic answer to a cold case…

The year was 1908, in the coastal town of Messina, Italy, located on the island of Sicily just off the “toe of the boot.”  It was early in the morning before the sun had crept over the horizon, and the black sky was filled with a steady downpour of rain.

It was a 7.1-magnitude earthquake, and the fragile stone structures built on the soft, sandy soil didn’t have a fighting chance.  Nearly every single structure -- every house, church, school -- either completely collapsed or was significantly damaged beyond repair.  Around 80,000 people in Messina did not survive, making up about half of the town’s population and including police officers, doctors, and political leaders who were desperately needed to cope with the aftermath.

And the tragedy didn’t stop there.  Only minutes after the shaking ceased, a large tsunami rushed in from the Strait of Messina, engulfing much of the town and taking 2-thousand more lives.

The event was unprecedented.  It was the largest earthquake ever recorded in Europe, and the tsunami seemed to come out of nowhere.  Remember -- Messina was not built along an oceanic coastline, but instead was located along the Strait of Messina, which is only about two miles wide at its narrowest point.  This large wave, which reached 12 meters (40 feet) in elevation on land above the normal water level, did not come from the middle of a vast ocean, but from a much less “conventional” source.

While 80% of tsunamis occur in the ocean, that leaves a solid 20% percent to happen in other bodies of water like seas or even lakes, and sometimes those tsunamis can be catastrophic.  Such was the case of Messina, Italy, in 1908.

And because the Messina scenario was so unusual, it attracted the attention of three insightful Italian scientists who immediately ventured to Messina and began collecting data.  They took measurements, spoke to survivors, and gathered information about timing and wave travel and anything else pertinent to the event.  They weren’t able to do much with the data at the time, but fast-forward a hundred years, and high performance computing entered the tsunami space in a big way.

Which Fault was at Fault?

Tsunamis are typically caused by vertical land displacement along a fault like, as seen in the NOAA video, or by a volcanic eruption.  With no evidence of a volcanic eruption being the culprit, it seemed logical that an earthquake fault was to blame, but where was the fault?

For decades, scientists examined the vast amount of data collected following the Messina event, but they still couldn’t pinpoint what actually caused the tsunami.  They knew it had to be related to an earthquake fault -- that much was obvious -- but there was no conclusive evidence supporting tsunami hypotheses of vertical shifts at a specific underwater fault line.

No one could even agree on where the guilty fault line was located.  Even by examining the same data, scientists had a plethora of different hypotheses.

But then, at the end of the 20th century, that thing called a computer came along, and suddenly data points could be used to computationally simulate wave scenarios.

“Someone had the idea, ‘You know what?  Since we can’t figure out what’s going on with the earthquake, what if we model these different earthquake faults that people have proposed, model this tsunami based off of each, and then we compare the tsunami data to what happened?  Whichever one matches the best, that’s the earthquake -- that’s the correct fault -- that person got it right.’”  - Lauren Schambach

And so the simulation science fair began.

Scientists all over the world ran simulations of various hypothesized earthquake scenarios and fault lines, and then the results were compared to historical data to see who got it right.

It turned out that none of the models based on scientists’ hypotheses could account for the actual event.  Every proposed underwater fault line land displacement just didn’t match historical data and observation.  Back to square one.

Then years later, in 2008, a group of Italian researchers came up with a new theory.  They proposed that the Messina tsunami was actually caused by an underwater landslide that had been triggered by the earthquake.

Not a vertical fault land displacement.  Not a volcanic eruption.

That meant that when the earthquake hit, somewhere under water in the Strait of Messina, the stress of the shaking combined with the force of gravity was strong enough to move seafloor slope material and cause a landslide -- one strong and fast enough to initiate a large wave on the surface, heading for Messina.

“The idea of my research with our co-authors and collaborators was we were re-looking at this case.”

Lauren’s expertise involves modeling tsunamis on computers, and she and her collaborators wanted to take a stab at trying to solve the mystery of the Messina tsunami -- of whether or not an underwater landslide was to blame.  By examining historical data combined with newer maps and newly collected data about the seafloor, including higher resolution grids and more accurate topography information, they came up with their own underwater landslide hypothesis, and then Lauren modeled it through high performance computing.

“We think that there actually was a landslide that was a contributor to the event.”

Aside from some water run-up data along part of the Strait of Messina, which still came up too shallow in the computational modeling, Lauren’s simulations appeared to match historical data, bringing us that much closer to knowing exactly what happened that day in 1908.

“We modeled about a two cubic kilometer landslide, which is pretty big.”

(Translation for my mom: about a cubic half mile.)

Lauren’s case is another example of how high performance computing has changed the way we conduct scientific research.  In the case of the Messina earthquake, we know more about what happened because we can “try out” our hypotheses until we get to the right answer.  That’s faster and more effective than examining a historical case without a computer, and certainly much cheaper and more ethical than attempting to recreate an actual tsunami… which no one is recommending.

What This Means Today

While computational simulation can be used to model scenarios of the past, it also shines in modeling what could potentially happen in the future.

In addition to the Messina tsunami scenario, Lauren has extensively modeled and studied the 2004 Indonesian tsunami (image below), as well as a variety of potential tsunami scenarios along the East Coast of the United States, including what could happen if a moderate earthquake hit just off the East Coast, or if there was a flank collapse in the Canary islands.

“Through some of the simulations that I’ve run, I definitely find quite often that a lot of waves’ energy often is focused at part of Ocean County, New Jersey -- an area called Mantoloking and Seaside Heights.”

Right where she grew up.

“So a lot of my simulations are just basically destroying these really awesome quaint coastal communities where I like to spend time.”

And as she runs these simulations, she passes the information to emergency managers to help them know how to initiate community preparedness, emergency response planning, and even zoning rules.

Thankfully, while tsunamis can cause a lot of damage, they are quite rare.  That said, even rare events are worth being prepared for.

According to the World Health Organization, more than 700 million people currently live in low-lying coastal areas, at risk of being hit by a tsunami.  And from 1998 to 2017, more than 250,000 people have died in a tsunami, including 227,000 in the Indian Ocean tsunami of 2004, and thousands more in the 2011 Tōhoku tsunami in Japan.

Add that to the number of people who visit beaches and coastal towns on a regular basis, or maybe even for a little temporary R&R.

“For example, [if] you’re going on vacation to the South Coast of Italy, which is a pretty popular thing to do, do you have any idea that there have been these events in the past?  Not even just a tsunami, but an earthquake?  And if you were in a coastal area and you experience an earthquake, would you know that the accepted protocol globally is if you’re near a coast and there's an earthquake, that you get to higher ground?”

Lauren, along with emergency preparedness organizations, say that’s the key in all of this.  The risk of being caught in a tsunami is low, but the advantage of knowing to get to high ground after an earthquake if you are near a coastline -- whether for an ocean, sea, or lake -- could be critical in that rare event.

For me, personally, while I live a safe enough distance from the oceanic coastline (pending a Hollywood-size wave doesn’t come for me), I do go running along the boardwalk on a peninsula each week, and after talking to Lauren, I’ve become especially cognizant what I should do in the case of an earthquake in the middle of my run.  I’ve even tracked down and read over the tsunami evacuation plans posted along the beach (which, I’ll be honest -- don’t look terribly comforting on this peninsula).

It’s interesting to think that wave simulations like Lauren’s have influenced emergency planning at my local beach.

Just another example of how supercomputers are affecting our personal lives without us even knowing it.

Jolie Hales is an award-winning filmmaker and host of the Big Compute Podcast. She is a former Disney Ambassador and on-camera spokesperson for the Walt Disney Company, and can often be found performing as an actor, singer, or emcee on stage or in front of her toddler. She currently works as Head of Communications at Rescale.