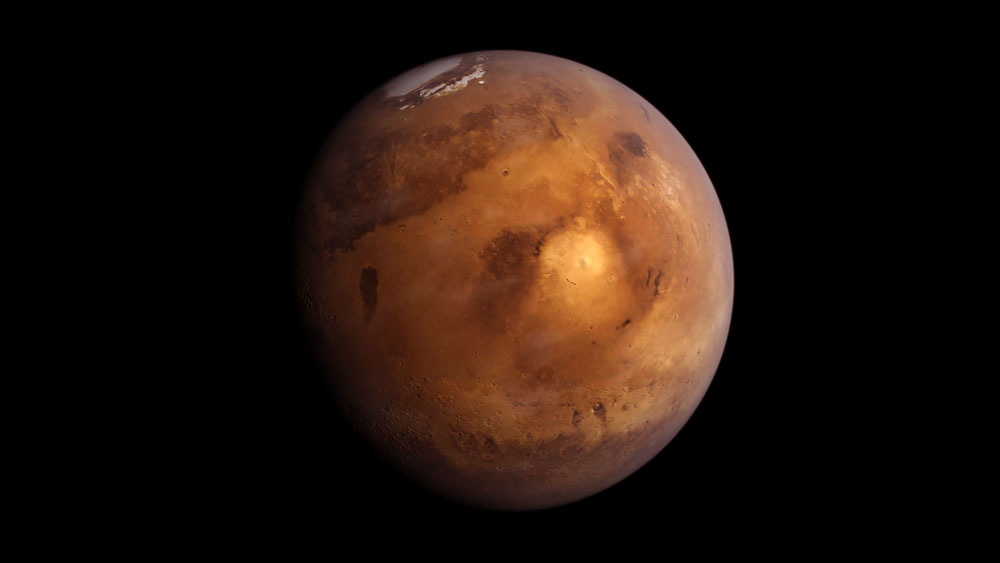 Few things can keep a child incredibly still on an exciting camping trip.

How did my parents achieve this? By convincing me that by holding a flashlight to the night sky, with very steady hands, I’d be able to communicate with aliens.

As our friendly neighborhood red rock, Mars has always held a special mystique for the human race, and with unwavering dedication, it’s where I directed my light beam.

I didn’t receive a call back from any Martians that summer.

The hunt for extraterrestrial life starts and ends with water: we know that living beings need liquid water to thrive. So for the latter part of the twentieth century, scientists were hard at work searching for the holy grail—water on Mars.

In 1971, the Mariner 9 orbiter sent back eye-popping images of dry riverbeds and water-eroded canyons on Mars. The findings only posed new questions. How could a dry, arid, and extremely cold planet have once been home to rushing rivers, lakes, and possibly even oceans?

Early equations left scientists scratching their heads: none of their models for a water-rich planet successfully aged into the Red Planet we know and see today.

Fortunately, the real scientists have more advanced technology for surveying the universe than my 3-battery Maglite.

If you’re one of 200 million players of The Sims video game franchise, then you’re not a total stranger to simulations.

When I wasn’t in the woods trying to hail down E.T., I was busy trying to improve (or burn down) the lives of the game’s eponymous characters. It’s one of the world’s best-selling games: a life simulator where you’re finally in charge.

Name your Sim a simple Susan or explore the outer bounds with X Æ A-12. Make your Sim a dance machine, an aspiring mansion baron, a bookworm, a serial afternoon napper—the world is your oyster. You pick the variables, and it’s time to sit back and enjoy the show.

NASA has access to extremely advanced digital playgrounds that do a bit more than wreak havoc on the lives of unsuspecting digital dolls. Supercomputers like Pleiades at the Ames Research Center in Silicon Valley can simulate atmospheric behavior for an entire planet.

Using these high-powered systems, Mars experts can mimic conditions for every five degrees of latitude and five degrees of longitude, carving up the planet into ultra-precise sectors as small as the drive from LA to Vegas. To map thousands of variables across a planet that’s 55.91 million square miles and 4.6 billion years old takes a lot of processing power.

And anybody who’s ever added one too many Sims to a lot knows how quickly extra parameters can slow down the system.

That’s why only a few supercomputers in the world can handle the project, and Pleiades is up to the challenge. This powerhouse has about a quarter of a million cores—around 249,990 more than your average MacBook Pro.
‍

Using high performance computing models like Mars Weather Research and Forecasting (MarsWRF), scientists can hit rewind and peer four billion years into the past to when it’s believed Mars was a watery paradise. Plug in more water, remove a few m/s² of gravity, plump up the thickness of the atmosphere—then hyper-age the system by a few decades or eons. Sit back, and see what happens.

Scientists like Dr. Michael A. Mischna use about 64 cores to run a full year of Mars at scale, all in a mere four to five hours. In less than a week, they can age a system 10 to 20 years to find out the precise atmospheric implications of the conditions they plugged in. Where we used to have a window into a dozen surface points, we can now explore over 100,000 details about the history of the Martian climate.

One variable Dr. Mischna and his team tested was the amount of water vapor in the atmosphere. Water vapor is a much more powerful greenhouse gas than carbon dioxide. Water vapor is such a planet-warming dynamo, that most scientists believed that the only way to heat the surface hot enough to sustain water was to pump extraordinary amounts of water into the simulation.

But something strange happened.

Water created big, puffy cumulus clouds. Watching these marshmallows are a perfect way to daydream outdoors on a spring evening. But they’re not very good at warming a planet.

Dr. Mischna and his team did an about-face: how about we make the planet dry instead of wet?

Off to Pleiades they went for answers. By reducing the amount of water in the equation, they were able to generate wispy, feathery Cirrus clouds. These high flyers are far better at reflecting heat back down to the surface, creating the perfect conditions for liquid water to form on the Martian surface.

You can listen to our full interview with Dr. Mischna on the Big Compute podcast:

To infinity and beyond

This tech doesn’t only help scientists look backward. They’ve created their own galactic version of the National Weather Service, able to find ideal times of year for Mars missions.

They can forecast landing conditions from 140–250 million miles away—estimating wind speeds, temperatures, and surface pressures. This information helps guide much of the exploratory endeavors of Perseverance and the Ingenuity helicopter, making sure scientists don’t send the lion’s share of a $2.9 billion mission into a haboob.

Mars isn’t the only planet benefiting from high-performance computing. Scientists are testing hypotheses using PlutoWRF, VenusWRF—even TitanWRF, simulating conditions of Saturn’s largest moon. There’s nothing but more on the horizon.

One of the great things about the WRF models is that researchers created them to run on supercomputers, but they’re lightweight enough to run on a MacBook—you’ll just have to wait a bit longer for the results. Right from their knapsack, scientists can now model a far-off planet’s weather system and test for conditions that could sustain life.

If I didn’t have to pack up and head back to elementary school that fall, I’d probably still be sitting at the campground today, waiting for E.T. to receive my flickering light beam. After all, in the 1997 movie Contact, Dr. Arroway’s dad did a bang-up job convincing me that there must be life on other planets. “If it is just us,” he mused, “it’d be an awful waste of space.”


Larissa Lewis is a content writer who thrives in the cut of complex ideas: on daily hikes she wanders through the underbelly of hyperreality, ponders how AI cohabits with human thinking, why birds named Veeries can better predict hurricanes than expert computing models, and how she as a DIY cryptologist can perfect her homemade Enigma machine.